I’ve been submitting my writing for publication for exactly fifteen years now. My first ever submission, to a small local journal, was mailed on January 10, 2000. On February 1, I submitted a short piece to a local contest. I never heard back from either.

On February 12, 2000, I mailed a submission to another local contest. I received a phone call shortly thereafter that I had won. I still remember playing the message back several times on the old answering machine. You know the kind that beeps and clicks and rewinds the miniature cassette tape, which ceaselessly fascinates the cat?

My 8th submission that year resulted in a Hedgebrook residency. My 14th resulted in being published by the esteemed journal Calyx.

Not bad for a first year. But consider that with three acceptances, I also collected eleven rejections. 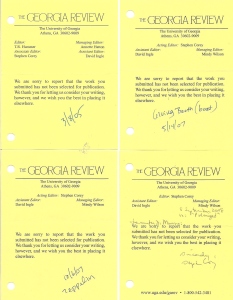 Over the last fifteen years, I’ve collected many more rejection slips than I have acceptance letters: about 85 acceptances out of 775 submissions (I should have cracked 1,000 by now, but I’ve had a couple of slow years, because, you know, the Momster thing). Not all of the other 690 were outright rejections: I had to withdraw some pieces after an acceptance when I’d sent out simultaneous submissions. Still, that’s a heck of a lot of rejection for even the most self-actualized adult to handle. I have a binder crammed full of rejection letters, with a supersize bag of Cheetos consumed for each one received. I know writers who have burned their stack of rejections, or who never kept them in the first place. END_OF_DOCUMENT_TOKEN_TO_BE_REPLACED