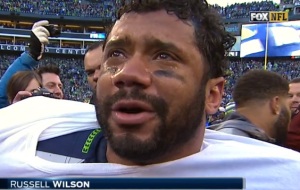 I did something terrible: when Seattle Seahawks quarterback Russell Wilson broke down and cried (and cried) (and cried) at the last-minute, miraculous win of a really important football game—I laughed.

It’s not what you think.

I laughed and mimicked him because of the spectacle being made over a football game. I would have laughed no matter who was crying: the mascot, the coach’s wife, the guy who makes sure the big Thermos is full so they can dump cold sticky stuff all over each other because that’s the most imaginative gesture these guys can come up with to celebrate a victory, the janitor who has to clean that shit up off the shower room floor and towels.

I did not laugh because a grown man was crying. Not just any grown man, but a macho symbol of a sport in which the men wear leotards and face paint and slap each other on their tight buns. I mean, a macho symbol of a sport in which strength, brutality, rape, wife beating, child beating, child molestation, head injuries, suicide, monotone narration in TV commercials, and DUIs are more common than a man’s tears. Not just any man’s tears, but an athlete who is man enough to cry publicly (not that he had a choice about the public part, with every camera in the United States on the field with him instead of off filming Kim Kardashian’s bottom).