“That duck is nicely showing its speculum,” my birding teacher pointed out as we stood in the pouring rain at a garbage dump reclaimed as a Natural Area: what better way to spend a Saturday morning?

She didn’t say duck. She said the waterfowl’s specific name: Gadwall or Mallard or Wigeon.

But I couldn’t tell you which one she identified, because all I heard was SPECULUM.

“You can’t always see it when it’s at rest,” she added.

I should hope not.

“If it has one, does that mean it’s female?” I asked. “And how can you ever see it if it’s…” I trailed off. I hadn’t even figured out the outside of birds, much less bird gynecology.

She looked stunned. “Do you know the word in that usage has never occurred to me before?”

Had she been a male instructor, maybe.

My friend Emily and I saw ancient speculums at the Pompeii exhibit, and, from my experience, it doesn’t feel like they’ve changed much since then. Except for the rust. My doctor always apologizes that the speculum’s cold, and I’m always like, honey, it ain’t the temperature that’s the issue.

If this had never entered my teacher’s mind, she must have gotten into birding way before the shock of her first OB/GYN exam. Mine was in college. A long time ago. I still remember it.

She added, “And nobody else has ever brought it up.”

What, nobody else—while looking out at a lake, trying to distinguish between Pelagic and Double-crested Cormorants—thought to mention a device used to pry open vaginas?

“See that band of color on its secondary feathers?” she asked.

I could barely see the duck through my wet and fogged glasses, much less make out secondary feathers, even if I knew what and where they were.

“That’s the speculum,” she said. “I don’t know why it’s called that, now that you bring it up.”

I’m sure there’s an etymological reason. Maybe the root word’s definition is “to take a gander at.”

“Males can have them, too,” she said. 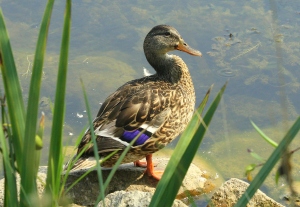 Two Speculums, from Pinterest/Ebay, but honestly, do you want to look at the Pinterest page of someone who includes a Pin of something like this? https://www.pinterest.com/pin/410812797232190178/

3 thoughts on “Speculating on Speculums”