The “Lovely Feathers Neck Warmer” comes nowhere near the neck, and it doesn’t look like any feather I’m familiar with, not even a flamingo’s. Obviously I agree it’s lovely or I wouldn’t have chosen the knitting pattern.

I never knit patterns with the colors specified by the designer. My motto is, “Why knit something that looks like you could buy it in a store?” So far I’ve reached my aspirations in spades. The motto might be, “Why knit an accessory that makes you look sane when you could look eccentric instead?”

If a pattern calls for one color, I often use at least three, and Lovely Feathers was no exception. Instead of solid pink, I chose three variegated colors: two I had hand-dyed myself, and one I had just purchased in a small town despite my New Year’s vow of buying no new yarn. I’d eaten too many dried apricots early on my four-hour drive home north from a weekend writing workshop. The Local Yarn Store (LYS in knitters’ lingo) halfway home had a nice bathroom, of which I found myself in urgent and frequent need, and $114.69 of yarn and wool seemed a fair trade when I finally hit the road again two hours later.

I’d pulled off at that freeway exit not to stop at the LYS. I’d sworn to avoid that beloved store, whose owner raises sheep from which they make yarn and cheese, because I already have enough yarn to last me a decade–until the apricots worked their way south.

I’d exited the freeway in order to tour the perimeter of the maximum security juvenile detention facility where JT, the Junior Terrorist, resides. I’d also toured the perimeter on my drive south three days earlier, on Valentine’s Day.

How had this young man—who could walk miles in a day to pursue an elusive bird, whom one experienced social worker said had more energy than any youth she had ever worked with—continued to make such eggheaded choices that he ended up locked in one of these buildings behind these high, barbed-wire-topped fences? A boy born to every disadvantage under the sun but who had been given every possible second chance? So much waste—wasted resources, opportunities, programs, interventions, and love.

Visiting hours were restricted to days and times not possible for me, so I could only circle the fence that sealed him in and sealed me out.

That roiling of my gut might have had to do with more than apricots.

I vowed I wouldn’t waste my new skein of yarn, a color called Hibernation. I wouldn’t let it languish with my eight boxes of yarn (plus yarn in the freezer [yes, the freezer], yarn hanging from the living room lamp, a large bag of white yarn that doesn’t fit in the boxes, a super bulky skein of yarn that doesn’t fit in the boxes, two skeins of my own hand-spun yarn hanging from a rack, and two large spools of fine yarn for weaving [I don’t weave…yet]). This doesn’t count the bags and boxes of raw fiber I have yet to spin into yarn.

Most of my yarn hoard consists of individual color skeins—no two skeins of the same color—from thrift stores, gifted to me by the Man I Married, relatives, and friends. So I have to mix colors to knit projects of any significant size, like Lovely Feathers, which seemed more like a poncho than a neck warmer.

I resist unraveling mistakes in my knitting. If I discover a mistake, I move forward rather than back. Too many stitches? I reduce stitches on the next row. Too few stitches? Add more in on the next row. A big hole? Sew it up from the back. Too small? Stretch it. Too big? Wash it in hot water and felt it.

I forge ahead. The mistakes and the fudging disappear into the fabric. The farther I progress with the pattern, the more invisible are the goofs, and the less blunders I make.

But the Lovely Feathers started wrong and kept getting worse. More a feral chicken with mange.

Besides not following color choices, I tend to get creative with patterns, which I interpret as “suggestions” rather than “blueprints.” I added in an extra “feather” on my cowl, so it would be loose around my shoulders. I made math mistakes in the conversion (shocking, I know).

I hand copied out the pattern rather than printing it, leading to more mistakes.

I made the collar too long.

I purled five rows instead of knitting them.

When I reached the second section of the pattern, I failed to copy out that I should repeat it until I reached almost five inches. I knitted it just once for a measly inch or two.

I had a gaping hole that would take more than a stitch to repair.

None of this bothered me much. Par for the course. It would all work out. Just keep going. Have faith.

But the cowl grew uglier and uglier. Like barbed wire rolling across the top of a fence, those five purled rows stuck out.

Still, keep going, I told myself as the world closed down around us and the news grew grimmer and scarier. Just finish the project I now called Covid Cowl or Pandemic Poncho. Nobody will notice the damage—especially from six feet away.

How do you know when you are really and truly done with something? When to give up and cut your losses? When to use what you’ve learned for the next project, call it a day, and can it? To recycle the supplies you’ve put into it, better invested in a fresh beginning? To give up on the time you’ve already spent and stop investing more time on a lost cause?

How do you know if something is too damaged for redemption? When no matter how well things seem to be going as the project progresses, the beginning’s structure will never adequately support it?

When it’s time to give up and move on, and chalk that experience up to a lesson that gave you, please God, at least a morsel of wisdom to carry into the next phase of your life?

When you just can’t make it right again, no matter your best intentions? No matter your wish to turn a blind eye to the conspicuous faults?

As I sat in my car in the Visitors parking lot—splashing through big puddles from a thick rain on the drive down, crunching over de-icing pellets under a blue sky on the drive home—staring through my windshield and the fence, sadness enveloped me like a misshapen and too-small cowl. I could not undo what had brought the two of us to opposite sides of this fence. JT, now almost 18 years old, was going to have to fix his own mistakes. The ugliness of past choices would not be covered up by careless fudging and disguise. The glaring transgressions would take long, hard work before they might begin to fade.

An arduous month into knitting the Lovely Feathers neck warmer, and three-quarters finished, without warning one night I ripped it all out. I simply could not continue with the disappointment of how it was turning out.

I can’t re-do bad life choices or the unfortunate ways in which I reacted to them, but I can re-do a disastrous, stupidly named, fucking knitting project that won’t alter the world one stinking bit.

Rather than moving on to a shiny new pattern, I began Lovely Feathers again.

First I got grumpy (the Man I Married will confirm this) over not being able to find in my massive yarn hoard the right yarn to try again with. Yarn stores were all closed due to the pandemic, in which people were dying in droves and losing their livelihood while I had a cow about not having the perfect yarn.

And then I found two greens, from entirely different places and times, that magically went together as if I’d bought them for that very purpose. One must have come from a thrift store; the other, a color called Dappled Sunshine, was the only other yarn I’d bought from that very same LYS, when I’d pulled through that same town a year and a half earlier—when I had no idea that town housed our state’s only maximum security juvenile detention facility.

I printed the pattern. I followed it to the letter. And I made something beautiful. Maybe I’m starting to learn.

Maybe JT will, too. After almost nine months in detention, JT will be released this week. I wonder what choices he will make as he moves from hibernation to dappled sunshine? 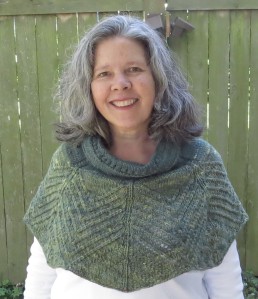