I decided to learn to crochet during the Covid-19 pandemic not because of boredom after months of quarantine, but because of this:

I saw no fruit in the so-called Fruit Garden CAL Blanket and didn’t know what CAL meant, but, I HAVE TO MAKE THAT, I thought-yelled when it crossed my screen during my rabbit-hole internet searches for macramé wall-art patterns.

Balderdash! I say to flibbertigibbets who point out that I didn’t know how to crochet. I didn’t know how to macramé, either, but our just-purchased 1900 house cried out for large swathes of handicrafts–to cover the criminal wallpaper, if nothing else. I’m parsimonious and figured rope was cheaper than art achieved by those with actual skill. Macramé couldn’t be that difficult, since stoned hippies (are there any other kind?) managed to make belts, plant hangers, and clothing with dubious coverage that would have shocked the Victorians, who were even more besotted with macramé than flower children were a century later.

Most of the decorating sites I visited for inspiration on Western Farmhouse-style (also known as Rural Vernacular) would best be named Crammed with Clutter: pillows and roosters and candles and wagon wheels and squash. No thanks. As if a farmhouse wife had time to dust all that crap with all of the butter churning and chicken beheading she had to do. I was just as busy with Facebook scrolling and cutting my own hair and trying to figure out who popularized macramé in the 70s: was it Cher, or Fleetwood Mac, or Greg Brady, or the movie Hair? Despite much diligent research in the name of high literature, I have not been able to discover the answer. Rest assured I’ll keep digging.

Our house’s former owner had excelled at collecting: we are still finding “yard art” and “collectibles” as we scour and scrub. “That place was packed,” a neighbor told me. “One day Jackie was moving things around and spied something in a box. She said, ‘I don’t remember buying that.’ She reached out for it, and it was a live possum.”

I prefer working with fiber no longer attached to the animal.

One look at the Fruit Garden CAL crocheted blanket, and I dumped macramé like a blind date I didn’t bother showing up for.

I considered diving right into the advanced Fruit Garden “Crochet Along” (CAL) project despite the up-front warning:

This project is not aimed at complete beginners or those relatively new to crochet and there is an assumption that you know your basic stitches and terminology.

Pshaw. The thing looked made up of squares. By the time I finished square one, I’d know the basics. Learn one square and I’d be on my merry way to an heirloom, handcrafted blanket, no problemo.

But then, this, early on in the pattern:

Also, it turns out a “dc” in the U.S. is a “trc” in the UK (where the pattern originated), along with other different terminology. I’d be dealing with crochet translation simultaneously with learning the language in the first place, plus acquiring the skills.

Hell’s bells. I was involved in a cross-state move during a pandemic. Did I really want to put myself through this trial? Well, yes, but how? When I’d learned to knit three years ago, a friend taught me. We sat hip to hip and cheek (hers) to double chin (mine), rubbing elbows and generously exchanging germs. Not possible during a quarantine. One crochet lesson with a careless teacher who’d been sneezed upon at a covert kegger could result in a visit from the Grim Reaper, demanding an eternal supply of black doilies.

Cue the online crochet lessons: for more manageable projects, like single flowers. I began retiring to bed immediately after dinner, armed with my laptop, crochet hook, and a ball of yarn I’ve had for several decades, for reasons I can’t begin to fathom, considering that I’ve acquired approximately 738 skeins of yarn in a few years.

Apparently, crochet was so simple that, unlike the thousands of online knitting lessons I’ve watched, crochet instruction videos didn’t need a voiceover. Cheerful [bootlegged] music accompanied videos of a disembodied pair of hands–the nail polish matching the yarn–accomplishing complicated tasks before my crossed eyes. Helpful captions like this one scrolled past:

The lack of narration made sense when I realized these pros all resided in Eastern Bloc countries and didn’t speak English. I’m not sure why so many are driven to film crochet techniques with English instructions (that might have been Cyrillic for all I understood them): cold winters and nothing else to do? No matter how skilled they were, I needed an instructor cooing helpful instructions, talking me off the ledge of giving up after extensive swearing because I’m lost after the first slip knot. I finally found a couple of rogue Yank tutors infiltrating the virtual market.

Once I began the basic chain stitch, the unexpected surprised me: Someone was beside me, guiding my stitches. Though I had no actual memory of learning this skill, I had done this before and had a strong muscle memory of chaining, chaining, chaining. I could crochet very easily. It was innate, nothing like the struggle and awkwardness of trying to manage two knitting needles. My grandmother had taught me, I remembered, and now she was beside me, as close as my friend Kathryn had been when she’d guided my hands through my first faltering and difficult knitted stitches.

The trouble was that all I’d done with Grandma, however, was make long chains. I’m not sure why I never graduated to patterns or making an actual item. It must have taken patience and restraint for her to allow me to stick with the simple accomplishment and never progress: she was a master of crochet and macramé, but she never forced me. Now of course I wish she had. I mourn that I didn’t learn the craft from her, but I was too busy watching MTV (she had cable, and we didn’t).

This time around, I was determined to advance, and it wasn’t long before I’d made a few flowers. 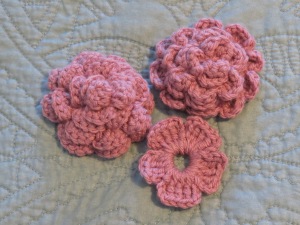 With some semblance of good sense, I decided to progress to an intermediate project before investing time and money for a lot of quality yarn required by the Fruit Blanket. I’d just whip up a casual throw made from less costly synthetic yarn, which I already had from a sweater I would apparently never make.

And a mere two months later, I finished.

I thought a “throw” would be small. Oops, I guess I should have read the pattern measurements: the blanket should measure 50 inches in diameter, and mine is 60 inches, which means it will cover me head to toe. I ended up buying twice the amount of yarn I already had. Here it is on our king-sized bed:

The Fruit Blanket captured my attention three weeks before the Junior Terrorist turned eighteen and would unwillingly fledge. I started the mandala throw five days before that pivotal birthday, two weeks before leaving him and my home of 32 years. Five months after the first known U.S. death, in my home state, of Covid-19.

With a rare focus for me (I have two boxes of unfinished knitting projects), I stuck with it, with my project yarn divided between two households hundreds of miles apart. I finished it five days before I turned 56, five weeks after moving into the farmhouse.

In retrospect, it’s not rocket science to comprehend that it’s easier to obsess about sc, dc, and trc, and having enough yarn, than about everything I’d left behind and the risk we were taking with a long-neglected house in a town where we didn’t know a soul but couldn’t meet anyone due to quarantine. I looked forward to this move but also gave up a full life and rich community: in distracting myself from those losses and failures, particularly in the realm of motherhood, I reconnected with my grandmother, who died when I was senior in college, back when I thought I knew everything. Now I know that I don’t know much, but I do know this:

Here it is, my first “square” of the Fruit Blanket With No Fruit. Maybe I should stick with circles? I like them in life–like a fortuitous chain back to a grandmother gone for more than half my life–so it makes sense to stick with them in crochet, too.